The Portuguese chronograph is one of the cult items in the portfolio of IWC Schaffhausen. Question: is the newest version a match for its legendary predecessor?

At the very beginning of this review I must confess a certain weakness for the IWC Schaffhausen manufacture. I remember the first days of my adventure with watches – the mailman brought me the IWC catalogue, in its magnificent white hard cover, and I just swallowed it at a stretch. When in August last year we decided to take a stop in Schaffhausen during our little “Road Trip” the excitement was also somehow greater. While most of the Swiss watchmaking concentrated their activities in the western, French-speaking part of the country, IWC opened their facilities in the German-speaking far north-east, on the banks of the Rhine river. The origins of the brand are not so obvious by the way…

The International Watch Co. (i.e. IWC) has been established by an entrepreneurial American from Boston – Florentine Ariosto Jones (engineer and watchmaker by profession). It was 1868 and the industrial boom in Schaffhausen made it a perfect location for siting a new watch factory. Jones’es concept was in strong conflict with the traditional Swiss handicraft approach to the business. It assumed using the waters of the Rhine river to drive machines, which would produce high quality movements for pocket watches, at an industrial scale. Such watches could conquer the world with their quality and moderate price. Without going deeper into the history of the brand, let us take a leap to the end of the thirties, when two gentlemen from Portugal – Rodriguez and Texeira – visited Schaffhausen.

Birth of the „Portuguese”

All the way back in the 15th and 16th century, Portugal had already earned the title of cradle for sailors. The names of Vasco da Gama, Bartolomeu Dias or Fernando Magellan are permanently inscribed in history and the Portuguese adventurers did not stop exploring the seas and lands of the still much unknown globe, discovering new lands and countries. Since in these time, not even the bravest visionaries could not dream of a thing like GPS (actually even the rather relatively accurate maps were an exceptional luxury), sailors had to rely their tedious calculations on expertise, position of stars and rather primitive instruments such as the astrolabe, sextant or, slightly later, the first marine chronographs. The two businessmen from Portugal came to order a chronograph – this time, the large and rather unhandy instrument needed to be reformatted to the size of a wristwatch and keep the accuracy of a chronometer. This is how, the first makeshift “Portugueuse” was born in 1939. With its huge (for the contemporary standards) steel case (43 mm), simple and legible dial and a pocket watch caliber inside, it caused a lot of consternation, but, much more importantly – gave birth to one of the best recognizable watch collections in the world.

Currently, the Portuguese line includes as many as 13 models, all the way from the simple hand-wound model (close to the original timepiece), the 7-day automatic (my personal favorite), a perpetual calendar, tourbillion, minute repeater, Grande Complication and the ultra-complicated Siderale Scafusia – the most complex timepiece in the history of the manufacture.
Of course, there are also a few chronographs – the sports Yacht Club and the cult Portuguese Chronograph Ref.3714 – probably the most popular model in the entire portfolio of the company.

The original chronograph in the Portuguese line, directed predecessor of the Classic model is probably the most popular contemporary model of the manufacture. It’s simple and modest design, with a very clear, almost minimalistic dial with no date indicator, small case (40.9 mm), well-proven caliber (Valjoux 7750) and moderate price turned out to be the golden recipe for success. This watch even appeared on the silver screen – Jamie Foxx wore the “panda dial” version in Michael Mann’s “Miami Vice” and the demonic Francis Uderwood (Kevin Spacey) wears the silver dial version in the excellent “House of Cards” series…

To be frank, even though the adoration of this version of the watch is general and rather unquestioned, I have never been a fan. I did not care for the too-subtle case, the lack of date indication, a chronograph counter limited to 30 minutes only and the general “wrist-feel” of the watch. The situation changes completely in the case of the Ref. 3714 successor – the Chronograph Classic Ref.3904.

I must warn you all right now, there will be a lot of “wows” here, the new Portuguese turned out to be an almost perfect timepiece.

If we put the old and new versions of the Portuguese chronograph side by side (see picture above), the similarities and differences between the two designs are obvious, with an obvious domination of the latter. The “marine” inspirations of the dial and characteristic details of the design have been preserved. We find a “railway track” type minute ring (not present in version 3714), characteristic design of the superimposed Arabic numerals and lean, polished hands. The small dials (12 and 6 o’clock) were also preserved but now the upper dial plays a much important role – I’ll come back to this later. A date indicator has been added (3 o’clock position). What is most important though, from the aesthetical point of view, is that IWC decided to apply the so popular gray polished dial – the effect is staggering!

At first glance, the contrast between the anthracite surface with the steel case and applications may seem dull, but the small detail such as the subtle solar grind, shiny polish of the numerals and small red applications (three indexes on the minute ring and chronograph counter) contribute to a really beautiful effect, further enhanced by the domed and edge-rounded sapphire anti-reflex glass. Every time we look at the dial from a different angle, we get a new portion of aesthetic sensations (I apologize in advance, no photograph can render them properly).

The case grew up to 42 mm and got a sapphire back, the afore-mentioned sapphire dome glass (approximately 2 mm high), chronograph push-buttons in the shape of pistons and non-screw crown with engraved IWC stamp. The whole piece is finished with a satin polish on the sides and shiny finish of the remaining surfaces and it looks great, with one significant flaw however. Two sapphires plus an automatic caliber with chronograph require an overall thickness of 14.5 mm – this is the size of a professional and extremely waterproofed diver watch. You can therefore forget about sliding this timepiece in the sleeve of your shirt, but on the other hand, the massive block of the case gives the feel of a solid watch, clamped to your wrist with a top quality but slightly too shiny black alligator leather strap. The Italian luxury shoe manufacturer Santoni is making these straps especially for IWC. The strap has black stich and an orange padding, specific to Santoni products. It is adequately soft, well fitted and matched with its steel butterfly clip.

While all these novelties are in fact the essence of the new Portuguese, the most important difference as compared to the Ref. 3714 model can be found inside the steel case.

I have written quite a lot already about the 89000 family manufacture caliber, used to drive the Portuguese Chrono Classic. I will save you a repetition of all the parameters and only mention the most important complication of this piece – linking of the chronometer counters. Testing the Yacht Club with caliber 89360 and the Ingénieur Chrono Racer with the same drive I was not really convinced by the common hour and minute totalizer. IWC is proudly presenting this solution as “watch within the watch” allowing intuitive readout of the measured stop times – in the Portuguese Chrono the system works just fine. This patented solution not only reduces the visual crowding of the dial but it also significantly facilitates the reading of stop times, even though the small dials and dense scales are not quite a model case of legibility. The functionality of the drive is unobjectionable, the handling is pleasant, the flyback works fine and only the specific sound of the dual-action rotor may sometimes cause some dismay.

Most probably, the aficionados of watchmaking ornaments will be somehow disappointed. Calibre 89361, like all the other calibres by IWC has a rather conservative and technical look to it. Decorations are limited to the concentric Côtes de Genève graining and the Probus Scafusia medal engraved on the skeletonized rotor.

The obvious question arising from comparison of the two Portuguese chronograph version is whether the new version is better or worse than the old one. Taking into account the fact that the Ref. 3714 will remain in the IWC portfolio, the loyal fans of this model have no reason to worry. In my opinion, Ref.3904 is an excellent evolution of the smart-casual chronograph in a better looking, more functional version, with improved and state of the art watchmaking know-how inside. Of course such improvements come with a price. The Ref.3714 costs approximately 8.000 Euro while the price of Ref.3904 went up to 13.250 Euro. This is a significant leap, but it seems to be justified – we are getting more “watch within the watch” – to paraphrase the classic. To me, the Portuguese Chronograph Classic is first of all a beautiful watch (most frequent comment made by my friends), with a spellbinding gray dial and absolutely all the functionalities I would wish to wear on my wrist. It is a perfect combination of the Portuguese line DNA with the technical ability of the IWC manufacture. Since the older version of the Chrono seems to live forever, there is something for everyone.

And finally, one more word about the potential competitors of the Portuguese Chronograph Classic. Since the market is offering at least a few manufacture chronographs worth interest and attention, the budget needed to get an IWC timepiece is offering some alternative options. The Omega Speedmaster with the 9300 caliber, the Zenith with its legendary El Primero, the Breitling B01, Jaeger LeCoultre or TAG Heuer with its two chronographs – 1887 and CH80 are targeting a slightly lower price level, while chronographs offered by Audemars Piguet, Vacheron Constantin, Roger Dubuis or Patek mean much higher prices. In a word, there are many options available and the IWC Portuguese Chronograph Classic could be slightly cheaper but it is really offering a lot. 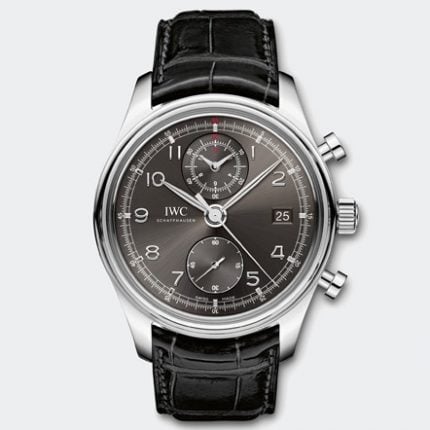