Quartz wristwatches usually fall outside our interest range, but there seems to be an exception to every rule – and Astron is not your everyday quartz watch.

Why do we so much adore mechanical movements? I know, I know, this is a gaudy thing to say, but even though we talk about inanimate objects, the watches constructed of hand-made, tiny elements do possess a magic of sorts. There is even more of it when we add the work of the watchmaker, who – with a loupe to boost his precision – meticulously assembles all the microscopic parts into a working movement. The movement, awakened into life by the balance wheel and a “breathing” hairspring may keep on living even for a few generations, if it is properly maintained. No one is willing, however, to spend a few months’ worth of their earnings on a mechanical watch just to have the comfort of the timepiece telling the time accurately – especially that the precision is the domain of the omnipresent electronic and quartz watches. These solutions do lose to the mechanical watches because of their lack of soul (although this is obviously a subjective matter) but even in this area of watch-map one may find noteworthy designs. Quartz and electronics open possibilities that traditional watchmaking cannot reach (mainly because it is constrained by its very nature). Although quartz technology did all but kill traditional watchmaking in the 1970s (as a fun fact – the near death of mechanical movements was the achievement of the very brand and model this text is about – the Astron), nowadays quartz movements are mostly associated with lower segments of the market (i.e. cheaper watches) or jewelry accessories for women.

Japanese-based Seiko is one of the few watchmakers who give quartz almost as much attention as is considered appropriate in case of mechanical movements. The Astron GPS Solar, which debuted two years ago, may even be called “a grand quartz complication”, which made it so much more fun for us when we asked Seiko for a test sample.

Sun and the Global Positioning System

There are two elements that make Astron stand out among the competitors – the mechanisms for power replenishment and time adjustment. In an ordinary quartz watch, the power bank is a removable battery which upon losing all the energy needs to be replaced – and this usually happens every few years. Astron stores its power in a small solar-powered accumulator, charged through special panels on the watch face. When fully charged, the watch can keep on ticking for half a year and even after being charged for ten minutes the battery allows the watch to function for a complete day. Full recharging requires about 50 hours of exposure to sunlight.

The second, more vital, element of the new Astron is the GPS receiver – a real novelty in a wristwatch. The case contains a module which receives the signal of the GPS satellites orbiting around the globe and adjusts the displayed time. This may be done automatically (every 24 hours) or manually, following a rather simple starting sequence. The 8x version of the Astron is the new incarnation of the model and its premier is scheduled for November 2014, but I managed to play around with the GPS module using the 7x’s user’s manual. The adjustment process is initiated by pressing and holding the 10 o-clock button; afterwards the user needs to lift the watch with its face towards the sky and wait for about a minute so that the signal of at least four GPS satellites can be received and the time adjusted (the 10 o’clock dial indicator will shift to the “Y” position). If needed, the date will also be adjusted. Time can also be set manually, by switching time zones with the crown. As an added bonus, Daylight Saving Time (DST) can be activated. The GPS and time auto-correction are especially useful if the owner travels across time zones frequently. One only needs to remember to switch the watch into “flight mode” when aboard a plane, just as one does with contemporary smartphones.

Apart from the GPS and solar battery charging, the 8x caliber is also equipped with a 60-minute and 5-hour chronograph with a split-time function, traditionally operated with two buttons. The stopwatch feature is a replacement of the Dual-time function from the first model in the series.

The 8x is also a step forward in the design of the timepiece. It is noticeably smaller, with a 44.6mm diameter and 13.3mm height. This is a welcome change (although the watch is still massive), but I still liked the style of the previous model much more – it seemed to have more character to it. The new version added some “luxury” in the form of polished indexes and finishing elements borrowed from the mechanical watches.

A few variants of the timepiece will be available – the test one was produced of lightweight titanium with a black ceramic bezel, sapphire glass, titanium bracelet whose links are polished and satin-brushed, with two-button folding clasp. The bracelet wears comfortably, but the design is somewhat outside my taste – again, the 7x version had much more appeal when my preferences are concerned.

The dial is a monochrome composition of the abovementioned luminous indexes, a minute ring with a UTC time zone scale, a date window framed in steel and three small dials. The 10 o’clock dial is a small seconds and a GPS signal indicator, the 1 o’clock is a minute counter of the chronograph and the 6 o’clock holds the stopwatch’s hour indication, power reserve level and the flight mode indicator. That is indeed a lot, but there are no problems with the legibility of the face, especially with telling the time indicated by two large steel hands coated with green luminous substance.

In the era of the growing popularity of smartwatches electronic timepieces will definitely win themselves a group of fans. Astron GPS Solar is not a smartwatch per se (for instance, it lacks an operating system), but one cannot deny it being “smart” (GPS) and the details combined with the quality of the whole watch leave all the electronic watches behind, together with a sizeable group of mechanical watches. As I have already said, Seiko is very serious about their quartz watches and Astron – in its both incarnations – is a serious piece of timekeeping work. Enthusiasts of quartz technology will be definitely satisfied, and the range of versions ought to appeal to each taste. Astron GPS Solat 8x encompasses 4 titanium models, 4 steel models and two limited editions. One combines steel with black ceramics and a white face, the other one is dedicated to the brand’s ambassador – Novak Djokovic – and is delivered in steel plated with pink gold.

A titanium Ref. SSE003 Astron costs right about 2.400Euro. For a quartz watch this is serious money, but – as I stressed from the beginning of this text – it is a quartz watch like no other. Just to think that I was reluctant to perform this test at first.

More on Seiko Astron on the official website  HERE. 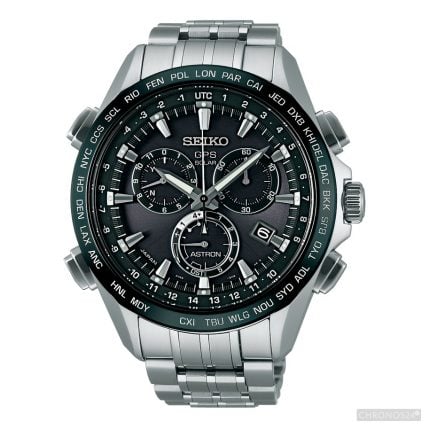 In (+)
– gps = constant precision
– sun-charging, easy and comfortable
– very well made
– significant size compensated buy the use of light titanium